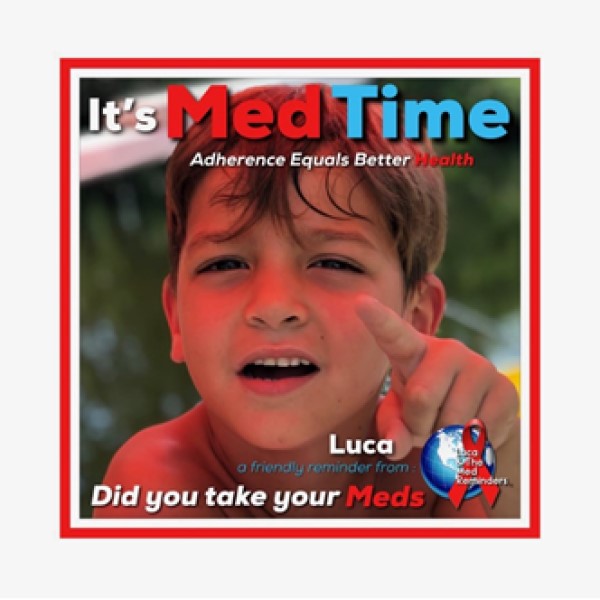 It all began when Luca was about age 3. At the time, his older brother Pierce, had just begun preschool. Luca suddenly felt all alone with his brother and playmate gone for the day. He had no one to play with. Luca would gather all of his toys, Legos, trucks, action figures and pile them next to my bed. I rested frequently as I was recovering from a 2014 AIDS diagnosis and required daily medications that needed to be taken on time, all the time throughout the day. As Luca played, he would nudge me asking, “Papa, will you play with me?”

As I ignored the little nudges, Luca would nudge harder saying Papa, please play with me! If I failed to respond, Luca would quickly start nudging saying, “Papa! You have to wake up. You have to get up. It’s med time Papa!”

Everyone in our home knew how important it was for me to adhere to all of my medications. Nobody expected what was to happen when suddenly both Luca and Pierce became constant reminders for me to take my meds. As time went on it became common if someone asked, “what time is it?” In harmony both boys would say, “It’s Med Time Papa!”

As an HIV advocate, I decided to make an image with Luca reminding others to take their medications. Before I knew it, another HIV Advocate reached out wanting to know if her boys could become Med Reminders as well. I began creating more images making them into medication reminders. Next thing I knew, mothers, fathers, grandma’s, even aunts were asking if their children or grandchildren could become Med Reminders. This eventually led to adults asking to participate as well! Now the Luca & The Med Reminder Team has gone global wide and has expanded beyond just the HIV community. Luca’s reminders are being used for all health conditions requiring medications taken on time.

Did you take your Meds today?